The Big Mash-up: Idea and Style 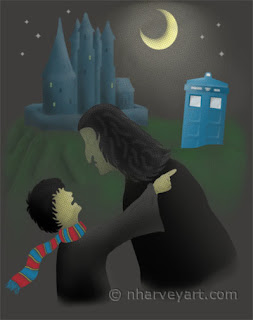 I have yet another entry in the Woot Derby this week, and will probably have one more next week. They've been very generous in announcing four themes in advance to celebrate the site's 10th anniversary.

This weeks theme is Pop-Culture Mash-Ups, and I wanted to work with and idea that I'd had for over a year. We all know that wizard schools are high security locations and no one can simply appear there at will. We also know that police boxes that travel through space and time can go anywhere...a bit of a paradox should they exist in the same universe, and the elemental soup of mash-ups.

So what would happen if said time-traveling police box appeared on the grounds of a highly secure wizard school? Would the universe implode? Or would a cantankerous professor be more focused on the fact that a student reporting this phenomenon was violating numerous rules to do so?

As a fan of both Harry Potter and Doctor Who, I could not resist this bit of parody. Of course, I'm not saying that the images here are representative of those stories. The boy in this picture has no glasses and wears colors that do not represent any Hogwarts house. And a police box is not necessarily a TARDIS; it's just a police box. It would certainly be an unusual site if someone were to truck one into the country and deposit it on the grounds beneath an old fortress. Anything more is in the observer's imagination. It's titled "That CAN'T Happen HERE!"

The most interesting thing about this project was coming to terms with my own artistic ability to project an idea. All the time I'd carried this idea in my mind, I'd imagined it in a more cartoon-like depiction. My ability to draw in this style is weak and I was not at all happy with what I came up with. I was on the verge of posting a message to see if any other artist would be interested in a collaboration when I finally asked myself if I could get this message across in a style with which I felt comfortable.


I'd recently done a couple pieces using negative space, drawing the "negative" shapes and using them as a guide before removing them, and I'd enjoyed doing those very much. So I abandoned the computer for paper and pencil and started sketching some outlines. Eventually I had a couple of human silhouettes that could make me smile (along with a mound of eraser crumbs that could possibly fill a dragon eggshell).

I used Photoshop to draw the castle and police box which incorporated more straight lines, then scanned in the other images. Once I started adding color, I was filling the shapes more completely, so a "negative space" this was not (um, yes... as long as we're doing mash-ups, it's completely appropriate to speak like Yoda). More of a stenciling technique this is. 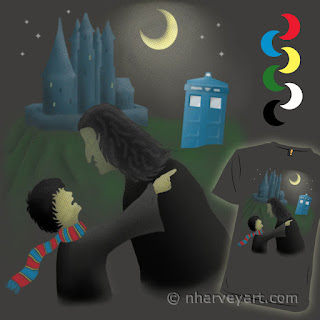 This entry is up for voting now through July 24, 2014, noon Central time. Many thanks to any and all who click over there to support me!