Thinking Ahead to Newton's Birthday (a.k.a. Christmas)

I continue to weather a storm of family caregiving obligations on my trip through life, which leaves insufficient time for art and even less for writing about it. After reading an article on fractals, I became obsessed with them and set about learning to use software for creating them. I hope to share more about that and some examples of my efforts at a later time.

In the meantime, I've posted another Christmas design for sale on Zazzle.

While the term "Newton's Cradle" may not be familiar, most people have seen one as the popular desk toy of metal balls suspended in a frame; when the ball on one end is swung into the others, they all remain stationary with the effect passing through to the one on the opposite end.

It illustrates the conservation of momentum and energy. I am not a physicist and won't be turning this into a science lesson. For those who are curious, I'll refer you to Wikipedia for the basics. I did try to find out why, specifically, this device is named for Sir Isaac Newton, but found nothing more definitive than the discovery of these physical laws being attributed to him. (If anyone has additional detail on the naming of this device, please comment as I'd love to know.)

It also happens that Sir Newton was born on Christmas Day, and what better way to tie these facts together than with a Newton's Cradle made with Christmas ornaments. 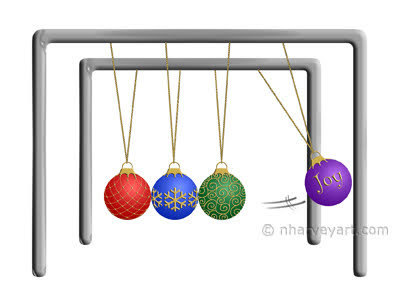 Inside the "Newton's Christmas Cradle" card is the simple wish of "Merry Christmas" followed by "(And Happy Birthday Sir Isaac Newton!)". The latter text may be removed, though I imagine it would prompt a smile for any science-oriented recipient.

This design is also available on POSTCARDS.

It's tough out there for many folks these days. Be good to one another and hang in there.