Everyone knows a Bigfoot fan. They range from those who are continually amused at the idea of such a novel creature to those who make forays into the wild to bang sticks and whoop out calls in hopes of a response. (I often wonder whether any responses are real or possibly another Bigfoot searcher.) Many fall in between, spending their weeknights glued to reality programs searching for elusive cryptids. I've got one of those.

It is in their honor that I created my newest design, "Christmas with Bigfoot."  He's overcome his shyness and is out for a walk, ready to spread some holiday cheer! 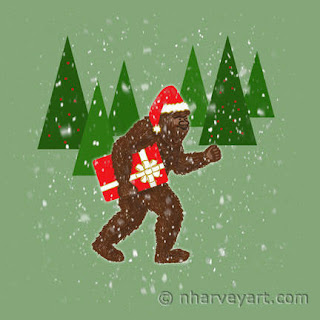 I uploaded the design in various parts so that I could arrange the elements (Bigfoot, trees, snow) most appropriately for each product. It was a bit more work than usual, but I'm quite happy with the way they turned out, with each differently shaped Zazzle products getting the best possible design arrangement.

Oh yes, I did mention cookies, didn't I? That's why you're still reading. I haven't forgotten and no, Bigfoot did not run off with them. This post is a "two-fer," or rather, a "three-fer."

I've been fascinated with repeating patterns and how they work so well for products like wrapping paper. Using a photomontage technique, I baked a batch of my favorite Christmas cookies—rolled out, cut into shapes and sprinkled with colored sugars—then photographed them. In Photoshop, I then cut the cookies from their background and piled them into a repeating pattern, one with an assortment of shapes and colors, and another with only tree shapes. Here are "Christmas Sugar Cookies" and "Sugar Cookie Christmas Trees."


Don't they look appetizing? (I can testify that they were delicious and exploding with crunchy-vanilla-sweetness!) Here are just a couple of the Zazzle products on which they're available.


Thanks for visiting, and please come again!

Tetris, Pointillism and the Eiffel Tower 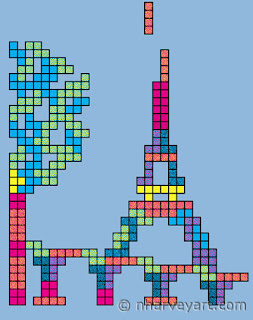 Take the latest Woot Derby challenge, to create a design in one of four artistic styles, one of which was pointillism. Pointillism is a technique where a picture is formed from a multitude of colored dots. Under magnification, all you would see is dots. Stand back, and they seem to magically herd themselves into a wondrous image of subtle colors.

An outgrowth of Impressionism, one of the pioneers in this technique was Georges Seurat. For inspiration, I looked at his paintings, and was drawn to this one of the Eiffel Tower. 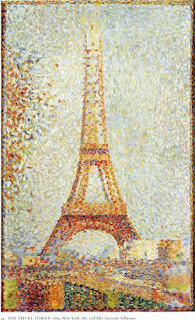 I thought about how I could use the technique and emulate this picture, but put a different spin on it. Square dots instead of round ones? Somehow that led to blocks, then Tetris blocks which could be used to build a structure and THEN... make the Tetris blocks out of dots. Yes, that would be interesting.

I didn't want to merely throw the Tetris shapes together like a puzzle; I wanted to be sure that if they were constructed in the course of a game, that the arrangement was viable. I started by making the shapes and constructing a tower by copying, pasting, arranging and rearranging. At first I thought I'd have just the tower and perhaps a pile of discarded pieces off to the side. But that didn't satisfy me, so I looked again at Seurat's painting and played around with adding the bridge and the tree to the side. The constant copy, paste and transform actions got old very quickly, especially considering that each paste created a new layer and it was difficult to keep track of which was which. So I printed out page full of blocks, cut them out, and played with them at the kitchen table for a while. Once I had a bridge and basic tree, I returned to pasting it together in Photoshop. 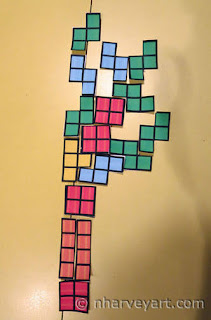 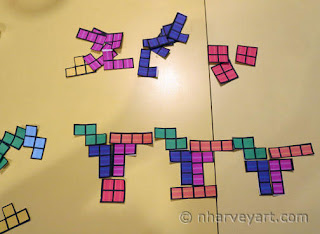 The next step was to "trace" the design using only dots. I did use the "snap to guides" feature to keep the outlines of all the blocks straight and orderly. And since I was using only cyan, magenta, yellow, black and white, I played around with combinations of dots in varying densities to get the color shades I wanted. Here are some close-ups, the second showing green, orange, purple and dark blue (clockwise from upper right). 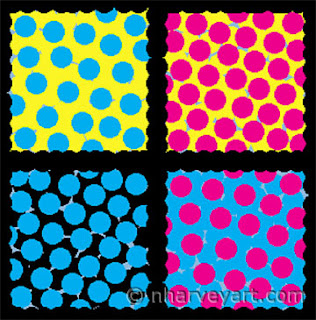 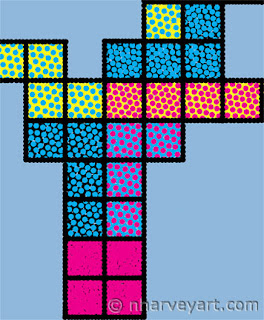 I’ve titled it “Not Playing to Win” since creating such a configuration in Tetris (if one were fortunate enough to get the right pieces and know where to place them) would quickly lead to the loss of the game. Still, I imagine it would be worth it and that reflects my attitude about the designs I create for the derby. 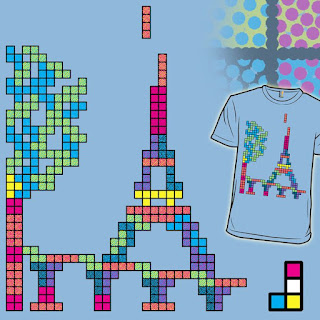 This design will be up for voting on the Woot Derby now through October 16, 2014 at noon Central Time. If you've ever purchased anything at all from Woot.com, you are eligible to vote. Thank you for your support and be sure to check out all the wonderful designs... I'm sure there will be some excellent artwork on display this week.

Posted by nharveyart at Friday, October 10, 2014 No comments: 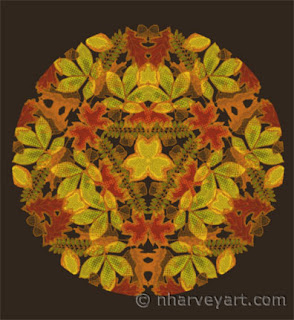 Often when we describe something colorful, we call it a kaleidoscope. Remember those things? Put a tube to your eye like you would an old-fashioned telescope and gaze at chips of colored glass reflecting into a mesmerizing pattern. Turn the barrel, and it would change, folding from one design into another.

Autumn is a colorful time as the green of the trees first dulls, then transforms into bursts of orange, red and yellow. For people like me who dread the fading of warm weather, the warm colors are a comfort and encouragement that I can make it through another round of cold weather.

The theme for this week's Woot Derby is Fall and Oktoberfest. They suggested making pies for them (and perhaps that would have curried some favor), but shipping one and keeping it fresh would have been problematic. Instead I was inspired by the kaleidoscope and created a design as I imagined one would appear if it were filled with jewel-like leaves.To make sure my representations were accurate, I searched for leaf models from various trees--maple, oak, birch, hickory and locust. I sketched each of these including some acorns as well, painted on the colors and arranged them over a 1/6 segment of a circle (there's your pie, Woot). I trimmed away anything that extended beyond the pie slice, then copied and turned it to fill the other slices, reversing every other one. And voila—a kaleidoscope of autumn color.

I actually began this design for Woot's Fall themed derby last year, but was unable to finish it in time. Another reminder that seasons change, and if fall comes again, so will spring and summer. 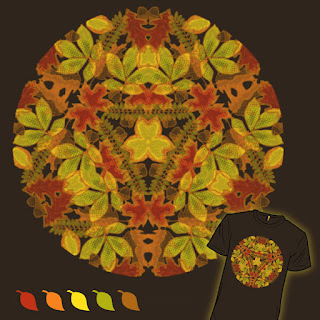 This entry will be up for voting now through next Thursday, October 9, 2014 at noon Central Time. I'm grateful for your support!

Thanks for visiting and please come again!
Posted by nharveyart at Friday, October 03, 2014 No comments: