Several weeks ago I stumbled across some instructional videos on drawing Celtic knots. Fascinated, I went on a knot-drawing spree, constantly sketching on little scraps of paper until I got the hang of it. I also printed out circular grids and drew an number of those, varying the patterns in each.

But me being me, I was quickly thinking about how I could apply this style/technique in other ways. Traditionally, they have been used in drawing shapes such as crosses and animals, so I wandered in that direction.

I'd been debating possible design subjects for the latest Woot derby which features specialty ink (either metallic or glow in the dark ink), when it all came together for me--a golden sun made of Celtic knots. Not an entirely original idea, but one I could try to put my own spin on. At first I thought I'd stick to more formal looking knotwork with a circular center and rays based on a trinity pattern. That just didn't feel right this time, so I went for a more loose, organic feel. I wanted strong and wild, yet also calm and centered. I call it "Jus' Chillin'." 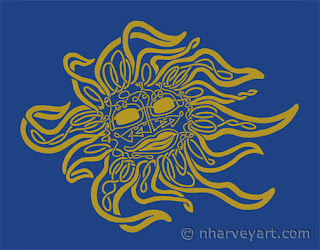 Strictly speaking, I don't think this can be called Celtic knotwork. There are places where it was impossible to follow the alternating over-under rule, and some of the lines are merely twists, but it does consist of only four individual lines that weave amongst the others and back to their own beginnings.

It all started on sketchbook page where I drew the outlines and features to be emphasized, finally adding the filler ornamentation. Recalling NASA photos of Sun eruptions and how they were often loop shaped, I used loops in the pattern surrounding and defining the center. After scanning, I traced the lines in Photoshop, thickened them and finally erased portions to indicate where one was passing beneath another.

The one thing I could not decide was the background color. After initially testing it against the shirt colors Woot offers, I'd decided on cranberry. Not only did it look good, but it enhanced the feeling of heat and wildness. 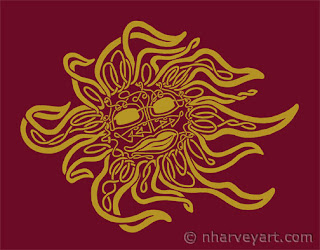 But once it was finished, I looked at all the colors again and the royal blue really grabbed me. For once I decided not to decide and entered both. I'll be interested to see which ranks higher with the voters. 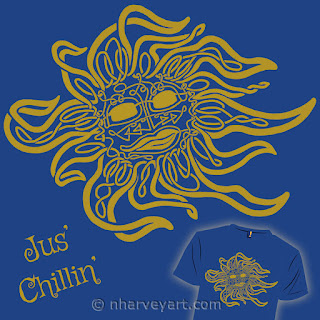 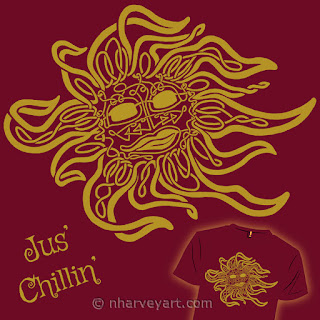 The above pictures are linked to their pages in the Woot derby. Your support—now through July 31, 2014, noon Central time—is greatly appreciated!