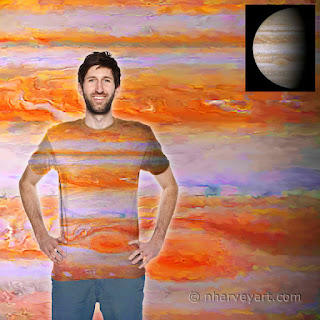 Ever have an idea you think is relatively simple and can be knocked out quickly, only to find that once you've begun, it's much more complicated than you ever imagined? That's exactly what I experienced this week.

I dare say that aside from our lovely Earth home, Jupiter is the most beautiful in our solar system. Named for the Roman king of the gods, it certainly is the largest, and astrologers refer to it as the Greater Benefic," some condering it a significator of good luck or at least of expansion. I'd been admiring a photo of it when I thought it would make a lovely print for a shirt. All it needed was a little editing... enhance the color, maybe try some filters to see how they looked.

Er...not quite. The project, at least, surely expanded.

Since I wanted to be sure to include that identifying feature of the Great Red Spot to one side of the shirt, I had to search for an image that matched that placement. Those were fewer than I'd hoped. But after finding this and verifying that it was in the public domain, I downloaded this one: 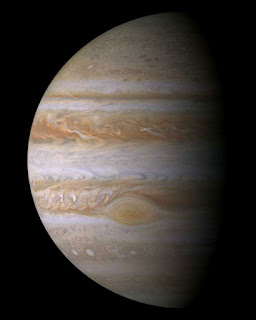 I started with some basic color adjustment, mostly increasing the overall saturation. It helped me to see more of what needed to be done with the rest of the image.Part of the image was in shadow, and I needed as much colorful canvas area as I could get. Playing with the light adjustments was not enough. So I duplicated the image and adjusted the shadowy part to be as bright as I could without making it look unreal. I then put a mask on it, and a gradient within the mask to hide all the parts that were too bright. I then combined these layers and trimmed the ragged edge. The shadow wasn't gone, but was significantly less.


After this I enlarged the image to be more suitable for printing via a method called step interpolation. I increased the size and pixel density by small amounts repeatedly until it got to where I wanted it to be. Normally this does not work well on a photograph, often resulting in fuzziness and distortions, but I often use it in my artistic edits where the images are more forgiving.

At this point I noticed the image appearing as if it was composed of many squares. I hadn't had this happen before, so I magnified the original and saw that they were there as well. I was unable to find out for certain, but I'm guessing that the originals were a composite of many pictures taken by the space probe, with minute differences in angle and time accounting for the difference in lighting in each. (Please leave a comment if you can confirm this or some other reason for the image's appearance.) 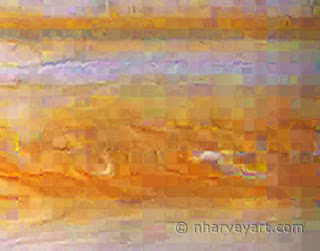 But as the final result of this was intended to have a more artsy appearance anyway, there was something I could do about it. I zoomed in on the squares and started blending them together with the smudge tool, one by one. I figured these were all pictures of clouds swirling together, so running the colors together a little more would not detract from the final impression. If anything, I think it made it look better, much like layers of paint dabbed and smeared together in a stormy cosmic marbling. Once this was done (and my hand uncramping), I decided any further transformations through filters would be overkill.

In the final phase, I tried a mockup and decided the color needed more work. This time I focused on the reds and yellows to brighten the oranges. The lower portion of the image was also in a bit of shadow, so after applying enhancements to the whole image, I used the selection tool to work only on the lower third, and then smaller sections as needed to bump up the color impact in these. I also increased the sharpness by a small amount and lastly, distorted the image slightly by increasing the width. This was necessary to be sure there was more than enough to cover the entire canvas of the shirt, but not enough to be recognizably stretched out.

Could this be your lucky shirt? Score it on Threadless and give it a chance! In addition, Threadless is trying something new with this particular competition. Not only can you score the entries, you can also opt to "fund" them. This essentially means filling out a pre-order form to buy the shirt IF it prints. If at least 50 people fund a design, it will print. If it doesn't print, you pay nothing.

And here's some luck for you already, as appreciation for visiting my blog...I'm giving you a coupon code to get $5 off, good for this design only. It's:  KJXEXW

Scoring is going on now through the evening of September 2, 2014 (Eastern Time). And if $5 is not enough, you can earn a rebate by signing up for Ebates and going to Threadless by clicking through their site or downloading their extension (as well as for purchases on many other shopping sites). Thank you for your support!