Cooling Down with "Rainbow Ices" 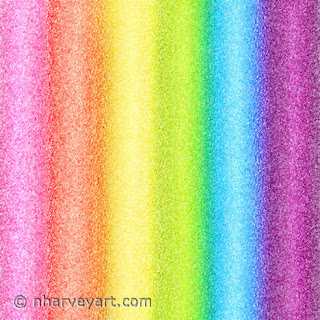 This week I pulled out an older design I had earlier intended to upload to Zazzle, but had hesitated thinking it wasn't quite right. It had begun with an experiment in using primary colors at 50% opacity, overlapping them to make a rainbow. I repeated this many times, eventually figuring out that doubling up on the primary colored stripes would give me a comparable opacity to the ones that had overlapped colors. I also adjusted the "primary" colors somewhat more to my liking, with pink and sky blue.

After that, I played around with numerous filters, and especially liked this version, thinking it had a frosty look to it, like a closeup of stacked ice pops of different colors.

In looking at it again, I decided it needed a little more highlight and shadow to imply three dimensions. While it's not a favorite method, I decided to do this with the Dodge and Burn tools, whose symbols look like a magnifying glass and a hand making an "o" shape in the PSE toolbox. The easiest way to remember which is which is to think of toast: when it burns, it's a darker color, but if it pops out of the toaster "dodging" the heat, it's lighter.

These tools can do a lot of damage, and the best way to handle them is in small amounts, building on their effect if necessary. Unlike the paint brush or pencil, every time the brush passes over an area, it adds to the effect, whether you've lifted the brush in between or not.

Working on a copy (always leave an original in tact!), I set these tools to just 5%. With a soft brush sized to less than one third the width of a stripe, I gently stroked the Dodge tool over the center of each stripe to increase the highlight, and the Burn tool over the lines where the colors met to shade them. Then I narrowed the brush, and did a little more on the centers of those areas, the result appearing like scalloped edges rising toward the viewer.

Not much of a piece of art by itself, but it's simple things like this that can make a great design when applied to practical items such as the many offered on Zazzle. I have one family member who has always been crazy for rainbows and anything rainbow-colored, and I'll bet you know someone like that too!

(The black dots on some of these images are links to open the new customizing features on Zazzle's site--not part of the product or design.)